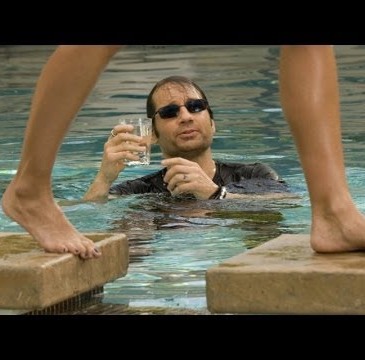 Of the three Latin historic womanizers on this list, only Casanova was a real person. Lothario and Don Juan are from tales spun 400 years ago, but they describe a type of man who is with us in spades today. All of these men are associated with male pathologies as they relate to women and all have captured the male imagination in one way or the other. In a sense, we could even add Peter Pan to this list.

Men, it has long been observed, are far more likely to be outliers in most endeavors, from the application of violence to math. Men are clearly on the orbital fringe of most all human activities, and as such, life presents a far greater set of opportunities to go wrong, than for women. Nobel Laureates and prisons are dominated by men, and for a reason. Women have lives than can go badly, but they do so in a tighter range, as they do most things. Take the top 10 most violent people on earth and the top 10 business risk takers; they are going to be men every time.

Men bring the same set of habits to their relational lives. Few things are more vexing to a man than how he must relate to women. He begins life with a mother, and there is a whole library of theories on how men are formed by their maternal bonds. But when he becomes an adult, he has a whole new set of problems and opportunities with the ladies, and here is where we find our three anti-heroes.

Don Juan, or in some instances of the story, Don Giovanni, is a fictional character traced to a play written in 1630 by a Spaniard named Tirso de Molina. Don Juan takes great pride in his ability to seduce women, but this brings him in to conflict with the father of one of his conquests. He kills the girl’s father, and in various versions of the story, he is killed and denied entry in to heaven by God, or confessions the murder and is forgiven. In its original incarnation, Don Juan was a selfish cad and his sexual process as the result of his ability to deceive, to be someone he wasn’t, and he seduced the girls for his own selfish pleasure. Murder was on the continuum of destruction. His sin and not his particular relationship to women was the issue at hand.

But then something happened to Don Juan. In later plays and musicals, his seductive power was presented as a sort of weakness within him. He is presented as someone who can’t come to terms with the fact that he will die so he acts like a perpetual younger man. In other instances, he is presented as a person with an arrested sense of adult development. He’s devious, like a child, but armed with the wits and prowess of an adult man. Why women fall for this obvious man-child is unclear, but he is a compulsive sexual addict, as we would call him now, who can’t find a more adult purpose, so he perpetually places the next women in his sites. He undergoes a metamorphosis; willful sinner to unwilling addict which is a microcosm of stories about so many men over the centuries. Don Juan is a man with no purpose, not even to make babies.

Casanova was a real person, a playwright by trade, born in 1725 to a theatrical family. His father died young and he was raised by his mother and grandmother. When Casanova developed an illness, he was sent to live with another family and at 11, came in contact with an older girl who fondled him. Of her, he wrote that she was “…pretty, lighthearted, and a great reader of romances. … The girl pleased me at once, though I had no idea why. It was she who little by little kindled in my heart the first sparks of a feeling which later became my ruling passion.”

Casanova tried many things in his youth; the clergy, the military, various other responsible professions, but he would not stick to them and he liked to gamble. After a long life of interacting on the fringes of nobility and being in the company of wealthy women who he would regularly seduce, he wrote an autobiography. His fame was limited to a few plays and books and articles, and to his many run-ins with the law due to his blasphemy and sexual activities.

In the end, he was forced to take a job as a librarian to a minor and much younger noble who did not admire him or care to hear his bullshit stories, and finally he took his own life, having never applied himself to anything like he brought energy and vigor to having sex. In his letters, he said “Cultivating whatever gave pleasure to my senses was always the chief business of my life; I never found any occupation more important. Feeling that I was born for the sex opposite of mine, I have always loved it and done all that I could to make myself loved by it.”

Casanova’s life was dominated by women, but did not include a wife or daughter.

Lothario has a bit more complicated history. The character is in a play written by a British writer Nicholas Rowe in 1702. Rowe places his character in the Anglo canon, but the original Lothario was a minor character in ‘Don Quixote.’ In both instances, Lothario presents as a lazy man who discovers by chance that he has a real skill for seducing women and gaining control over their times and resources. He’s more of a “pool guy’ or ‘milk man’ character; less compulsive than Don Juan or Casanova, but a man with little other mission in life other than bedding females. Lothario has no stated profession, religious feeling, or creative spark. Lothario is just there, and he is perhaps more of an example of the sexual complications and contradictions of the women he seduces, than a man of intense and tragic pathologies.

The stereotype of men represented by Don Juan, Casanova, and Lothario is absolutely still with us and I would maintain, a growing category of males. The phenomenon of fatherless boys is related to guys who engage in recreational sex with willing and, I suspect, morally empty females, and take no interest in the children produced by those unions.

But a growing category is of men are those who, while sexually active, have no children. They don’t want children and in most cases, don’t want marriage either. Casanova had no issue, and neither did Don Juan or Lothario, and this type of man have changed outwardly but inwardly, is the same.

Plenty of men died childless in history, but this was not by design. Young men died in battle, in accidents, as the result of some tragedy or sacrifice, but that is materially different from men who are perfectly healthy, interested in females, regularly engage in heterosexual sex, and yet, reach the age of 50 with no children.

These men likely have developed many hobbies; they make their own beer, they cook, or they may just have collections of odd things, like old cameras or classic video games. But what they don’t have is any of the hallmarks of previous male adulthood, which included a family. They don’t have wives and they don’t have children. These men are at an evolutionary dead end. Even if they ride a Harley, they are soft in the middle to the hardest realities propagated by the world, which remains, in an evolutionary sense, red of tooth and claw. They are the men C.S. Lewis predicted would come to be common; Men Without Chests. They are here now, and in abundance. They have plenty of penis, and lots of brains, but to what end? It is the chest that grants purpose and continuity and on that score, they have fallen short.

There is no replacement for being a Dad and accepting that responsibility. A few exceptional men have created strong substitutes; they became leaders of men who were not their biological children. But for the average healthy man, if he can sire children, and does so, and accepts the role, there are great benefits, not to his child but to HIM, that can’t be substituted. Those men that don’t stay for the full ride, men like Don Juan and Casanova and Lothario and the average man-bun sporting beta, they really missed out on more than they can know. Sex is the precursor to the actual act of consequence, and men are continually in the process of forgetting that.