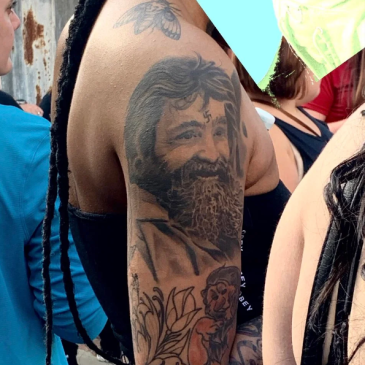 This series looks at the origins of American counterculture through the lens of Charles Manson and the murders credited to his name.

Charles Manson was the anti-George Washington of the new American culture. He was a relentlessly malevolent force who presented as something he wasn’t. He did not embrace any of the values that the hippies said they stood for, and as noted, he was not really one of them.

Manson was clearly against the Civil Rights movement. He hated black people and commonly referred to them as “niggars.” Writing things in the blood of his murder victims was done to pin his crimes on the Black Panthers. In one of the few instances where he did the killing himself, he shot a Black Panther member, Bernard Crowe, and left the man for dead. Search the many pictures of the “Family” and see if you can find any black faces. You will search in vain. He wouldn’t even accept black women into his harem. His egalitarian façade was entirely false. He had no Asian or Latin followers in the family.

Feminism?  He did not embrace rights for women, though he spoke much about setting them free sexually. This was, of course, bogus nonsense; he set them free so that he could have them and then he could rent them out. He had no respect for the rights of women beyond their right to be his tool. He thought them equal in the sense that they could be sent out to do evil. His feminism was built around serving men.

The environment? We can affirm that Charlie’s carbon footprint was likely very small, but he was neither a hunter, camper, hiker, or nature photographer. He was not into any of the natural sciences and studied no biology or any of the other pursuits dedicated to understanding the nature world. To the degree that he had a vision of the future, it was built around an environmentally harmful apocalyptic war. Charlie didn’t even have any pets.

What Manson did was to coopt the hippie countercultural ethos and bend it to his criminal will. He was a real trend setter in that department. He had a primitive feral understanding of the vulnerabilities and possibilities the new culture had to offer. The pathologies he engendered and took advantage of are now writ large across our fragmented social landscape. Here are a few examples.

The counterculture has done nothing for black Americans. How do we know? We can look at the lot of black people who have fallen under the away of counterculture leaders to see what they really think. To the counterculture of guilt, black people are objects of pity and there to dole our government largess, regardless of the result, in exchange for votes. Find a thriving black community before the 1970s and I will show you a ghetto there now.

White women have fared well in the past 50 years, but female progress has come at a steep price, often borne by women who have been freed from the state of sexual monogamy, but they now have more trouble finding mates, and forming stable marriages. As noted, “Charlie’s Girls” have no happy endings in their lives. Many millions of abortions later, many post sixties women are childless and lonely. I have met these women; they are counter-culturalist to a soul.

Black women have made progress if they can escape the effects of ghetto culture, but they are in a world of missing black men. To be born black and male is to run a higher risk of jail or death than a child born white and male. Black mothers carry the grief for the destruction of the black family. Women are better off, but certainly Charlie exhibited all the vices of the countercultural male.

Charlie’s buffet line of spiritual beliefs is mainstream now. There are still Scientologists, and all manner of Christian sects. But mostly, there are the nominally religious who only follow the rules that serve them. Charlie was not one for any service to others, and neither are many of the post-sixties Americans. Even civic organizations like the Foreign Legion, or the Boy Scouts, are in decline. The fastest growing religious definition in the Untied States is “no religion.”

Politics has, in many ways, become our secular religion, and Charlie’s anti-society beliefs are firmly ensconced in our political culture. The activist class regularly castigates American culture and practices as hopelessly a part of the patriarchy and a product of ‘white supremacy’. No gains made by any identity can shake the ironclad believe that the United States is a bad country full of ‘cis-gendered squares and white male oppressors.’ Charlie has many white male contemporaries that parrot these same lines and live quite well. In a case of supreme irony, the richest and most successful are the ones that parrot Charlie’s lines. What an incredible triumph.

Finally, Charles Manson struck a savage blow to the whole idea of family. His clan was a tribal gang of the lost and confused who he shaped to his will. It was not a family. He was never a father to the kids he was responsible for. His first son was named Charles Manson Jr but changed his name to Jay White. Jay White committed suicide in 1993. Manson’s other two sons had no contact with him in any normal sense. Chaos in American family life, uncommon in Manson’s time, is not uncommon now.

What Would Charlie Do?

What would Charlie do if he was to come back today? Would he be a small government free market capitalist? Or would he be a part of the new hippie left, endlessly talking about ‘systemic racism’ and ‘the new Jim Crow?’ Would he advocate for environmental stewardship, or would he be gluing himself to museum walls to ‘bring awareness’ to climate change. Would he be a stable married man, or an ‘ally’ in the fight for ‘gender equality’.

I submit that Charlie would fall right in with the weed smoking ‘antifa’ crowd and then some. They are at the vanguard of American culture now. He would find a way to use them, and they would love it. He’d have millions of social media followers. He would get what he was denied in 1969; actual celebrity outside of jail and the money that comes with it. He’d mouth diversity pieties but practice none of them. He’d mouth gender and trans advocacy and convert every woman he met into a tool for his pleasure or advancement.

He would not have changed, because he wouldn’t have to. Our culture has moved towards him, and he’d fit in better than ever. He wouldn’t have lived his life in prison because the legal authorities would have either not convicted him, or they would have let him out. OJ Simpson walks free, and we can’t bring ourselves, after 20 years, to execute Khalid Sheik Muhammad, the self-acknowledged mastermind of the 9/11 attacks that killed 3000 people. There is no way we’d hold Charlie responsible for what he did now. He’d be a huge celebrity and bask in the glory he so desperately wanted then.

We’re all Charlie now because he and many like him were at the vanguard in 1969 and they are in the mainstream now. He was able to achieve this dubious distinction mostly through the luck of having the right values at the right place at the right time.

It would be hard to overstate his influential his name and image have become. Scores of bands have sung his songs, used his name, or simply donned is image. Trent Reznor of the band Nine Inch Nails rented the Tate house and recorded music there. He also recorded an album there for Marilyn Manson, aka Brian Warner, born in 1969 in Ohio, near where Charlie Manson was born.

Charles Manson has been the subject of many feature movies, several popular books including Helter Skelter, the most popular true crime book of all time, countless press reporters and before he died, he was interviewed relentlessly where he would trot out his crazy act.

Leslie Van Houten, Susan Atkins, “Tex” Watson, and other original Family members changed over time, possibly none more so than Van Houten. She turned her journey into a spiritual quest. But Charlie never changed. It’s him in all those interviews. He was always there, and he never changed because he didn’t have to. We were moving towards him all along. He has died, in prison, after 83 long years, but he is in no way dead and gone.

Back to the beginning

The man who does not read has no advantage over the man who cannot read.